The Next Photo Shoot 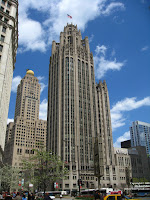 This shot was taken on Michigan Ave. in Chicago on my Canon PowerShot SD850IS. I love the photo because it looks like it was taken in 1970. I don't know what it was. It was the perfect lighting, and the photo came out beautifully. Plus, I was walking when I took it.

PHOTO ASSIGNMENT
I was contacted by my photo employer regarding the next photo shoot. The assignment called for me to travel to the far south suburbs of Chicago and visit a local brewpub to shoot a pretty typical shot list - interior, exterior, bartenders pulling beer, waitstaff profile with food, and of course young 20-30-something cute folks eating, drinking, and having a great time.

So, after an hour drive and an additional short 30-minute "detour" (I missed my exit) I finally arrived to the location just in time to shoot beautiful exterior shots while the sun was setting and the sky displayed a beautiful arrangement of colors. I shot with the Canon XTi, and the 16-35mm f/2.8 with the 580EX II Speedlite. With me was my Nikon D70 and point/shoot SD850IS. I shot the XTi in Standard and Faithful modes, with the color saturation levels cranked up to about 70-80% with really push the colors, as I have found that without the boost in the color saturation, the photos were often washed out and bland. The managerial staff on location was inviting and very helpful in getting me the shots I needed. The bulk of the photos were knocked out in about 20 minutes. It seems that in the suburbs, the hardest part is to find the target demographic my publishers are looking for. So I literally shot EVERYONE in the demographic, as far as age, but many of them did not fit the "camera-friendly faces" I was looking for. Again, I stuck around to await any additional demographic-friendly folks to come in. I was not expecting this to be a problem, but alas, it was. I had to deal with several drunken patrons whom were rightfully curious as to what I was shooting. The funniest thing they would do is scream out something obnoxious like, "BLACKHAWKS RULE!" while I was shooting interior shots. It's funny that in the year 2009, people still think that their shouts can be captured in still-shots.